We Recovered Millions of Dollars for Our Clients in 2019

Drunk driving in Maryland and elsewhere remains one of the most significant causes of deaths and injuries on the roads. A Maryland drunk driving accident attorney picks up the pieces after an intoxicated driver has caused a wreck. We fight vigorously for the rights of victims of DUI crashes.

Impaired driving can be caused by alcohol and drugs, both illegal and prescribed. Although vigorous police crackdowns on drunk drivers, educational campaigns, and the growth of ride-hailing services have helped reduce drunk driving in recent years, it remains a massive problem. Drunk driving claims the life of a victim every 50 minutes in the United States.

If you or a family member has been hurt by a drunk driver, you should contact a Baltimore drunk driving accident attorney as soon as possible to fight for justice against the drunk driver who hit you. How Common Are Drunk Driving Accidents?

According to Centers for Disease Control and Prevention (CDC), 29 people die every day in car, truck, bus, pedestrian, and motorcycle wrecks involving an alcohol-impaired driver. The yearly cost of alcohol-related crashes totals more than $44 billion. In 2016, 10,497 people lost their lives in drunk driving crashes, accounting for 28 percent of all traffic-related deaths in the United States.

How Many Drunk Driving Victims are Reported in Maryland?

Maryland drunk driving wrecks cause an average of 443 serious injuries a year. Many more people suffer other injuries from the actions of impaired motorists. 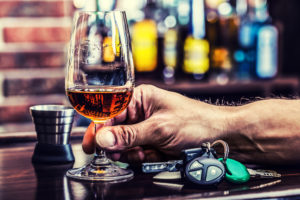 Alcohol and drugs affect driving in many different ways. Intoxicated drivers may also become delusional. In their impaired state, they believe they are safe to drive.

Alcohol is a depressant. It slows down the body’s nervous systems and delays normal brain function. Driving after consuming alcohol can cause the following:

Drugged driving poses similar threats to the public as alcohol. Both over-the-counter and illegal drugs can be deadly for drivers, passengers, and others on the roads.

A report by the Governors Highway Safety Association highlighted the rise in serious accidents caused by drugged driving and poly-drug use which entails driving after taking multiple different drugs or combining drugs and alcohol.

The report found in 2016, 44 percent of fatally-injured drivers with known results returned positive results for drugs, up from 28 percent just 10 years earlier. Marijuana, a drug that has been legalized in many states, and opioids are fueling the toll of deaths and injuries on the roads. Characteristics of drugged driving include: In Maryland, drivers are charged with driving under the influence (DUI) when their blood-alcohol concentration (BAC) is .08 percent or above.

This .08 limit is a standard measurement used across the United States for impaired adult drivers. Maryland has a zero tolerance of alcohol for drivers under the age of 21.

Any driver under the age of 21 who is found to have a .02 percent BAC or above faces the suspension or revoking of their driver’s license. Commercial drivers face a lower BAC limit of .04 percent.

Criminal charges help attorneys representing people hurt by drunk drivers. When a driver is drunk, he or she is deemed negligent and liable for injuries or wrongful deaths in a Maryland car wreck.

Drivers who refuse to take a breath test face the confiscation of their driver’s license. Drivers are not permitted to refuse a breath test when they have been involved in a crash that causes injury or death in Maryland.

A Maryland drunk driving accident lawyer will have little trouble establishing that the driver should be held legally responsible for any injuries, or fatalities in an accident caused by a drunk driver if that driver is charged with DUI in a criminal court or refuses a test.

However, a drunk driver can escape liability when the crash was not linked to impaired driving. Even after a driver is charged with DUI, the victim must prove that the impairment caused the accident. A driver who runs a stop sign and collides with a drunk driver who is subsequently charged with a DUI will have little success in suing the drunk driver for his injuries. When is Suing a Drunk Driver More Difficult?

In some cases, it’s less straightforward to prove the driver who hurt you was intoxicated. The driver may have been too badly injured to receive a blood test at the time of the wreck.

Drunk drivers routinely leave accident scenes and are sober by the time of their arrest. It’s also more tricky to prove a driver was under the influence of drugs given the lack of a universal test comparable with the breath test for drivers who consumed alcohol.

In these cases, a drunk driving attorney often has to delve deeper. The lawyer will look at behavior at the accident scene consistent with impaired driving, talk to eyewitnesses, investigate the driver’s habits, criminal record and driving history.

The victim of the accident must also show his or her injuries were caused by the drunk driver and were not from a previous accident or a preexisting condition.

What To Do After a Drunk Driving Wreck in Maryland

A drunk driving accident attorney will advise you on a series of key steps to take after you are hit and hurt by an intoxicated motorist. The steps are similar to those you should take after any wreck but you should look out for and record any signs of impairment. The Rights of Passengers and Pedestrians in Maryland DUI Wrecks

Although the victims of drunk driving crashes in Maryland are often other drivers and the drunk drivers themselves, other parties are routinely injured or killed by intoxicated motorists.

Many DUI crashes are single vehicle crashes. Often passengers pay the ultimate price with their lives.

Usually, passengers have the right to sue drunk drivers or family members of deceased passengers can bring wrongful death actions. One exception may be when a passenger gets in a car knowing the driver was drunk.

Pedestrians are also at risk from drunk drivers. Walkers have been mown down on crosswalks in Baltimore by drunk drivers who mounted sidewalks or when standing on the shoulder of the road.

However, Maryland does not allow punitive damages in car accidents caused by drunk drivers, even when a drunk or drugged driver caused a death or serious injury. Recent bills to award punitive damages against hardcore DUI drivers have failed in the Maryland General Assembly. What a Baltimore DUI Accident Lawyer Can Do for You

If you or a family member has been injured by a drunk driver, call our DUI accident lawyers as soon as possible. An experienced lawyer will provide:

The lawyers representing the drunk driver know their client will fare badly if details of intoxication reach the jury.  They will do everything possible to keep the defendant’s impaired state from being exposed.

They will seek to minimize the role played by intoxicated driving in the accident. The lawyers or insurance company for a drunk driver may want you to settle quickly, hoping you won’t even realize that the at-fault driver was impaired. It’s vital that you get experienced legal help as soon as possible, and certainly before you reach any settlement.

A Maryland intoxicated driving lawyer will advise you of all your legal options including how you can get your car replaced or repaired if a drunk driver totaled your vehicle in a crash in Maryland.

At the Baltimore personal injury Law Offices of G. Randolph Rice, we have represented hundreds of people who were injured by drunk drivers and the families of those who lost their lives.

We know how a DUI driver in Maryland can destroy your life and your livelihood. We will fight to obtain a fair settlement that includes both your economic and non-economic damages.

If necessary, we will take the case all the way to a jury trial. Call today to schedule a free consultation and tell us the details of your accident. There is no fee unless you recover money for your injuries. Call us at (410) 694-7291.