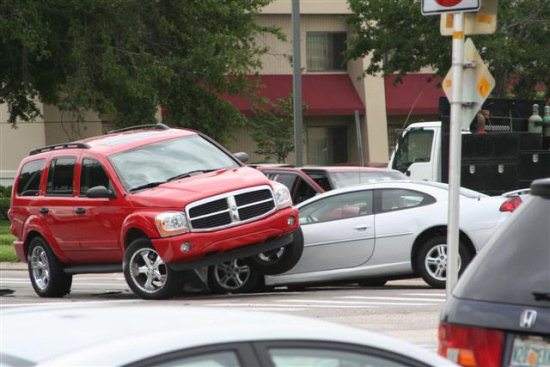 Turning left is one of the most dangerous maneuvers drivers make on the roads of Maryland. Left-hand turns are usually made across oncoming traffic. the driver making them often makes a judgment call on the speed of approaching traffic.
Statistics about how often left turn accidents occur in Baltimore follow national trends. Almost a fifth of all traffic accidents involves a vehicle turning left. Baltimore has many notorious intersections that see numerous wrecks every year including Gwynns Falls Parkway and Reisterstown Road, and Northern Parkway at Jones Falls Expressway.
Although left turn accidents in Baltimore usually involve low speeds at intersections, they can be extremely serious and even deadly. Some cities are seeking to build dedicated turn lanes to eliminate traditional left turns because they are so dangerous. Baltimore left turn car accident lawyer Randolph Rice explains left turn car accident statistics and how to prove fault in a car crash caused by a left turn.

About 22 percent of car accidents involve a vehicle turning left, according to the Department of Transportation. the department states a staggering 53 percent of all cross-path accidents, in which traffic crosses another right of way, are the result of left turns. Baltimore recorded 22,613 crashes in 2018, according to the Maryland Department of Transportation,  a 13.4 percent increase on the previous year. About 5,000 of these crashes were likely caused by left turns.
Left turns are so risky that an article making the case against turning left was published in 2014 in the Washington Post.
The author pointed out that while 53.1 percent of crossing-path crashes involve left turns, only 5.7 percent involve right turns. In other words, you are almost 10 times as likely to come to grief turning left then you are turning right.
Left turns typically involve oncoming traffic whereas right turns do not. Drivers who turn right are unlikely to hit another car, although they may crash into a cyclist or a pedestrian. However, pedestrians face greater danger from right-hand turners in Baltimore and elsewhere.
In New York City, the transportation planners found left-hand turns were three times as likely to cause a deadly crash involving a pedestrian as right turns. The study found 36 percent of fatal motorcycle accidents involve a left-hand turn in front of a motorcycle, states the Motorcycle Safety Foundation.
Engineers and city planners are increasingly turning against left turns. Tom Vanderbilt, the author of the popular book Traffic, branded left turns “the bane of traffic engineers.”
As well as the safety implications, Vanderbilt said left turns cause backups. He wrote:
“It’s either a car stopped in an active traffic lane, waiting to turn; or, even worse, it’s cars in a dedicated left-turn lane that, when traffic is heavy enough, requires its own ‘dedicated signal phase,’ lengthening the delay for through traffic as well as cross traffic. and when traffic volumes really increase, as in the junction of two suburban arterials, multiple left-turn lanes are required, costing even more in space and money.”
The congestion and the dangers of oncoming traffic explain why left turn accidents are so common. Many intersections lack a green turn arrow. Drivers realize they have a very small window to turn left as traffic approaches.
Drivers behind them may be getting impatient and honking their horns, particularly at peak times. the driver making the turn frequently takes a chance or misjudges the speed of approaching cars. Turning motorists are often distracted.
They fail to see smaller vehicles like motorcyclists with alarming regularity. These crashes often prove to be fatal for riders. A Baltimore car accident lawyer can help you recover damages if you are injured in this type of accident.

Types of Injuries Associated with Left Turns in Baltimore

Left turn accidents can cause very serious and potentially-deadly injuries. Left turn wrecks often cause T-bone accidents. the sides of vehicles afford less protection than the fronts and backs.
The Insurance Institute for Highway Safety (IIHS) found side-impact accidents cause 24 percent of passenger vehicle occupant deaths. A side-impact accident occurs when the front of an oncoming vehicle hits the side of another vehicle.
Often the thin barrier of metal on the side of a car is insufficient to prevent “intrusion” when the front of a vehicle pushes through the passenger compartment of another vehicle. Cars have little space to cushion the blow and escape a severe impact.
T-bone accidents in Baltimore often cause head and neck injuries. These wrecks can cause a loss of consciousness and a traumatic brain injury. During a side-impact collision, a driver or passenger’s head often remains still as his or her body is pushed to the side.
Neck injuries like whiplash and herniated disks are common. Other frequent injuries from T-bone accidents include serious injuries to the thighs, broken collar bones, and pelvises.

Proving Fault After a Left Turn Car Crash in Baltimore

The driver making the turn is usually held liable for a left turn car accident in Baltimore. Typically, the driver turning left does not have the right of way and must wait for oncoming traffic to pass before turning. On occasions, the turn accident was caused by the other driver. the driver of an oncoming car may be held to blame if.

Turning left in Baltimore can be nerve-wracking. At peak hours, the city’s streets are chaotic and drivers are often impatient. This can cause anxiety and ill-advised left-hand turns. Here are some tips to make a safe turn.

Although most drivers perform safe left turns, a substantial minority are reckless in crossing traffic, careless, or distracted. Older drivers or inexperienced teens are more likely to misjudge traffic and make hazardous turns.
You should always approach intersections with caution. Don’t try to beat the lights and make sure the road is clear before making a turn.

A Maryland car accident attorney will evaluate your case and tell you if another party was to blame for your injuries in an intersection accident. At Rice, Murtha & Psoras, we have helped drivers and passengers who suffered terrible accidents due to drivers making foolish and reckless turns in Baltimore, as well as drunk and distracted drivers. Please call us at (410) 288-2900 to find out if you have a case.

Get Your
Free Case Review